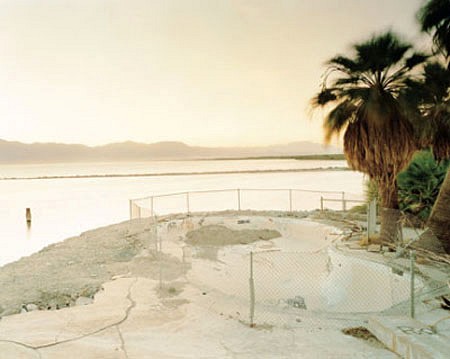 Holly Johnson Gallery is pleased to present “No Lifeguard on Duty” by J. Bennett Fitts.  This group of 10 large-scale C-prints is the result of the artist's recent travels across the U.S. in search of 1960’s roadside motels and their ‘pools’. The exhibition runs June 22 through August 18 with a reception on Friday, June 22 from 6 to 8 p.m.

In that free-wheeling decade, motel pools epitomized a lifestyle that fit with the times.  Whether on a desert highway or on a coast, the artist’s vision speaks of a simpler, more optimistic time of leisure and travel attracting many great American families. Fitts is a romantic at heart and his photographs are as much about dusks, cloudscapes, and desert atmospheres as they are about swimming pools. The subject matter exists primarily to facilitate a sublime vision of the land, as well as to remind us of our humble position in the enduring scope of nature.

While I've always been interested in landscape photography, I have never been drawn toward creating heroic imagery. I have instead been drawn to the subtle and banal work of the new topography movement and photographers like Lewis Baltz and Robert Adams. The sense of quiet and isolation that pervades their work is a quality I hope to bring to my own. And yet I set out to achieve an aesthetic beauty that they were less interested in.  J. Bennett Fitts

J. Bennett Fitts was born in Kansas City, MO in 1977. He received a B.F.A. in photography from the Art Center College of Design in Pasadena, CA in 2003. He began his career as a skateboarder and skateboard photographer, which initiated his intense focus on place: a set of stairs or a curb became more than simple objects, but tools for life. This idea of taking an object created for one purpose and making it into something completely new is the binding element of work.

In 2005 his work was selected for the “New American Talent” at Arthouse in Austin by Curator/Museum Director, Dan Cameron. He won first place for Fine Art Landscape at the International Photography Awards earlier this year. His work has been featured in recent solo exhibitions in Boston, Los Angeles, New York City, and Portland and has been written about for Art in America, The Austin Chronicle, The New York Sun, The New York Times, The New Yorker, and the Portland Mercury. His work can be found in the collections of Pfizer, West Collection, the Collection of Charles Cowles, O'Melveny & Myers LLP, O'Donnell Golf Course & Country Club, Sprint, and Creative Artist Agency.