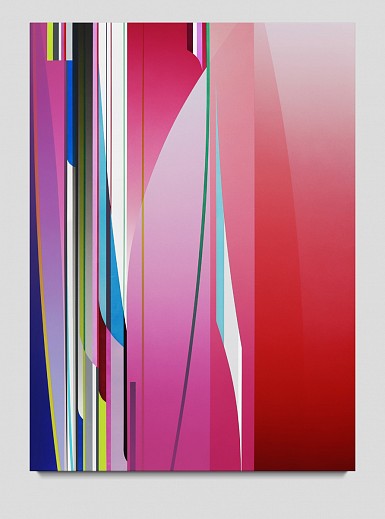 Holly Johnson Gallery in Dallas is pleased to announce an upcoming exhibition by Los Angeles – based artist Dion Johnson. ‘VIBRANT’ marks the artist’s second solo show at the gallery and features ten new paintings. An exhibition catalogue written by Annabel Osberg will be available. An artist’s talk will be held at 5 p.m. on Saturday, January 8th, followed by the opening reception until 8 p.m.

It is not easy to put into words the striking visual impact of Johnson’s boldly hued works—images that look, at turns, like bright ribbons of color, or light refracted along the edges of falling water. The art critic David Pagel reaches for similes to explain the effect: “The L.A. painter makes color fat, like the belly of the Buddha … Johnson also keeps color taut, like a sail in a gale, stretched to its physical limits in gracefully bulging curves that are elegant, functional and forceful.”

Fat but taut, elegant but forceful: such descriptions might seem paradoxical unless you’re looking at his starkly linear canvases with crisply delineated vertical shapes twisting together - a sort of abstract yin and yang, suspended in space. Southern California based artist and critic Annabel Osberg writes, “Devising his pictures with the premeditation of an architect, Johnson crafts his compositions in Photoshop, then transfers the initial sketches, which he considers “blueprints,” to canvases via rulers and masking tape. Even his utensils—drywall tools, rubber spatulas and spray guns—seem more like that of a mason.”

Brash yet sophisticated - the work and its kinky rhythms has earned Johnson coverage in publications as diverse as the New York Times, the LATimes, ARTnews, Artforum, The Huffington Post, and L.A. Weekly.

Holly Johnson Gallery is located in the Dallas Design District at 1845 East Levee Street #100, Dallas, Texas 75207. Gallery hours are 11:00 am to 5:00 pm, Tuesday-Saturday, and by appointment. For more information, please call 214-369-0169, email info@hollyjohnsongallery.com, or visit www.hollyjohnsongallery.com.