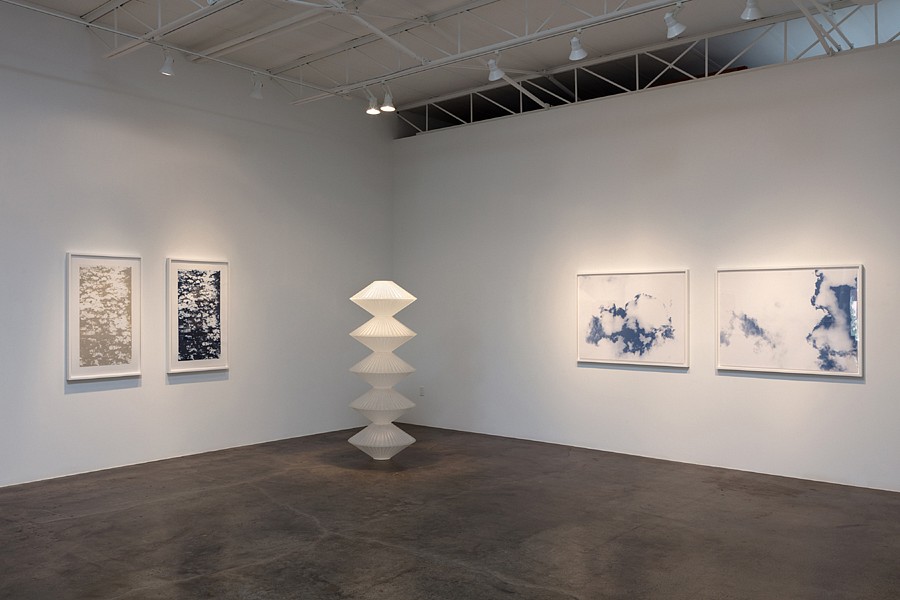 Holly Johnson Gallery is pleased to present Joan Winter: Edge of Light, an exhibition of new paintings, sculptures, and prints by the acclaimed Dallas-based artist. An opening reception will be held Saturday, February 18 from 5-8 pm. The exhibit continues through April 29.

Joan Winter explores the relationship between the visible and invisible. In a climate often reflecting chaos and crisis, she invites the viewer to engage in moments of quiet and serenity. Her current show, Edge of Light, is grounded in an inquiry of time, memory, movement and light. In the new paintings series, Skylight, Winter examines the illusive calming light in the sky after storm clouds transform to white light. Winter's work is both timeless and immediate.

Layering copper plates or screens, she prints on handmade paper or linen, building surfaces that fuse color and texture. Working in multiples or in series, she thinks of her prints as three-dimensional - looking through space. An intense physical presence is registered in the etching series, Deep, an investigation of water movement from inside a waterfall. Her prints are typically large scale with a subtle sense of color. Winter's three-dimensional work is made in wood using a band saw as a drawing tool and often cast in translucent resin to capture an ethereal sense of light within the form.

Winter was born in Fort Worth, Texas. She studied art and architecture at Texas Tech University and then worked within the architecture field for ten years, most notably working for the firm coordinating on the Kimbell Art Museum where she met the architect Louis Kahn. His philosophy of elevating form beyond its materiality has had a lasting influence on her work. She completed her MFA at Southern Methodist University Meadows School of the Arts in 1993, focusing in sculpture and printmaking.

She began exhibiting in the mid 1990's and has recently shown her work in Kyoto, Japan and Arequipa, Peru as well as recent solo exhibitions in New York, Chicago, Houston, Dallas, and Austin. Joan Winter: Edge of Light marks the third solo exhibition at Holly Johnson Gallery. In conjunction with an international conference in Japan, she spent time studying Japanese architecture. She experienced firsthand "the spiritual quietness and connection to nature". These studies remain vital to her work and offer continuing inspiration.

Winter won first place in Print TX, 2013 at the Museum of Printing History in Houston. Her prints have been selected for juried exhibitions by curators from the Museum of Modern Art in NY, Whitney Museum of American Art, Berkley Art Museum, CA, and High Museum, GA. Her work is in major museums, public and private collections both nationally and internationally. Most recently, five of her prints were acquired by the Museum of Fine Arts, Houston.

Holly Johnson Gallery is located in the Dallas Design District at 1845 Levee Street; #100, Dallas, Texas 75207. Gallery hours are 11:00 a.m. to 5:00 p.m., Tuesday through Saturday.  The gallery is a founding member of CADD - Contemporary Art Dealers of Dallas. For information or images please contact us at 214-369-0169, email info@hollyjohnsongallery.com, or visit www.hollyjohnsongallery.com.