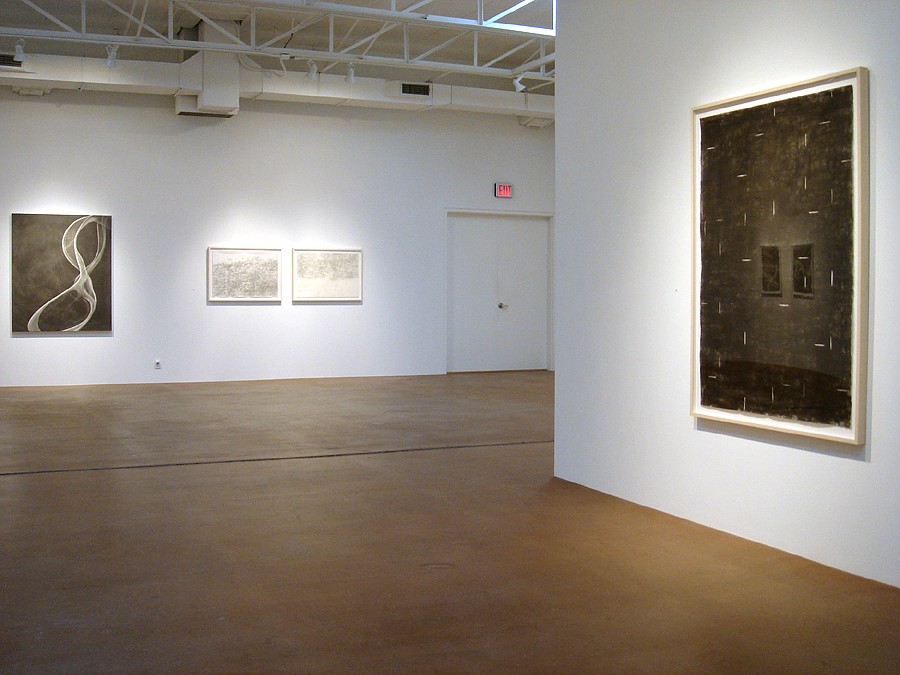 Holly Johnson Gallery in Dallas, Texas is pleased to announce the opening of Delineation on Saturday, February 16th from 5:00 to 8:00 p.m. The exhibition features works from each of the following artists: Theresa Chong, Jacob El Hanani, Otis Jones, Agnes Martin, Dorothy Napangardi, and Mark Sheinkman. Delineation continues through March 22, 2008.

Delineation features works of art by a diverse group of artists selected according to a visual theme.  Far from being a definitive interpretation, this allows viewers to focus on the similarities of these seemingly unrelated works, opening up the potential for infinite points of view. The discovery of accidental and unexpected connections allows us to revisit the boundaries and possibilities of abstraction.

Theresa Chong was born in Korea in 1965 and immigrated with her family to Fairbanks, Alaska in 1974. She received her MFA from the School of Visual Arts in New York City. Chong’s delicate works on handmade Japanese rice papers consist of intricate meandering pencil lines punctuated by minutely painted gouache elements. While open to interpretation (celestial maps, musical notations), the work remains fundamentally and purely abstract. Her work is included in the collections of the Whitney Museum of American Art, the Museum of Fine Arts, Houston, the Yale University Art Gallery, and the Fogg Art Museum at Harvard University, among others. The artist resides in New York.

Jacob El Hanani was born in Morocco in 1947.  He is a tireless and meticulous mark maker with works composed of thousands of tiny lines and/or letters.  El Hanani has exhibited his work in many prestigious institutions such as; the Museum of Modern Art, the Museum of Fine Arts, Boston, the Metropolitan Museum of Art, the Corcoran Art Gallery, the Jewish Museum, Fogg Art Museum at Harvard University, John Michael Kohler Arts Center, the Tel Aviv Museum, the Orlando Museum of Art, Yale University Art Gallery, the National Museum of Modern Art in Tokyo, the Art Gallery of Ontario, the Cooper- Hewitt Museum, and many others. His drawings are in numerous public collections including The Metropolitan Museum of Art, the Museum of Fine Arts, Houston, the Philadelphia Museum of Art, The Fogg Art Museum at Harvard University, Yale Art Gallery at Yale University, The British Museum, The Menil Collection, The Hirshhorn Museum and Sculpture Garden, and The Art Institute of Chicago. The artist resides in New York.

Otis Jones was born in Galveston, Texas in 1946. He received a MFA from the University of Oklahoma in 1972. Jones’ work involves meticulous attention to process, dealing with the physicality of materials.  By burnishing, scratching and sanding his surfaces up until the right moment, Jones’ creates relationships of color and form, which are brutal, yet elegant in their simplicity.  His work is in the permanent collections of American Airlines at Dallas-Fort Worth International Airport, A. H. Belo Corporation, Compaq Corporation, the Dallas Museum of Art, MIT List Visual Arts Center, Neiman-Marcus, The Old Jail Art Center, the Springfield Art Museum, and the Tyler Museum of Art. The artist resides in Dallas.

Agnes Martin (1912-2004) Martin’s work seems deceptively simple, stripping composition to its barest bones, emptied of image, narrative, and meaning in any conventional sense.  The rigid geometric order is counterbalanced by the humanity of touch.  The grids can be described as hazy, hovering veils of repeated forms, which are articulated in fine lines over pale grounds. Since 1958 Martin's work has been the subject of countless exhibitions. Her work can be found in museum collections such as: the American Academy and Institute of Arts and Letters, The Chinati Foundation, The Dia Center for the Arts, the Fogg Art Museum, Harvard University, the Hirshhorn Museum and Sculpture Garden, the Los Angeles County Museum of Art, The Menil Collection, The Metropolitan Museum of Art, Centre Georges Pompidou, The Museum of Modern Art, the National Gallery of Art, the Solomon R. Guggenheim Museum, the Stedelijk Museum, the Stiftung Ludwig/Palais Lichtenstein, the Tate Gallery, the Walker Art Center, and the Whitney Museum of Art, among others.

Dorothy Napangardi began painting in 1987 after she moved from her home in the outback of Australia to Alice Springs in the Northern Territory. She then enrolled at the Institute for Aboriginal Development to familiarize herself with Western painting materials. Her paintings are created by an intricate network of lines that collide and implode on top of each other creating a play of tension and expansion, transporting the viewer through a myriad of intersections. Her work is included in the collections of many prestigious Australian institutions such as the National Gallery of Australia in Canberra, Queensland Museum, The Erskine Collection, The Kerry Stokes Collection, The Australia Council Collection, South Australian Festival Centre Foundation, and The Homesglen Institute of TAFE Collection. Her work can also be found in the Linden Museum in Stuttgart, The Kelton Foundation in Santa Monica, The Kaplan-Levi Collection in Seattle, and The Vroom Collection in The Netherlands. The artist resides in Alice Spring, N.T., Australia.

Mark Sheinkman was born in 1963 and received his B.A. from Princeton University in 1985. Sheinkmans’ paintings and works on paper feature undulating and rhythmic lines that insinuate spatial depth and movement - lines that float across the surfaces, creating web-like formations with a dense and sculptural linearity. His works are cumulative manifestations of his working process; a slow, labor-intensive application of graphite mixed with oil paint; the alterations of surface by use of erasers and rags; and the mysterious, alchemical manipulation of light and shadow.  His solo exhibitions include the Von Lintel Gallery in New York, Gallery Joe in Philadelphia, Fruehsorge Galerie in Berlin, Gallery Sora, Naha in Japan, as well as many others. His work is found is numerous public and private collections including the Museum of Modern Art, the Metropolitan Museum of Art, Whitney Museum of American Art, the National Gallery of Art, the Museum of Fine Arts in Houston, Cleveland Museum of Art,  Yale University Art Gallery, Fogg Art Museum at Harvard University, as well as the Bibliotheque Nationale. The artist resides in New York.