Richard Stout: The Arc of Perception 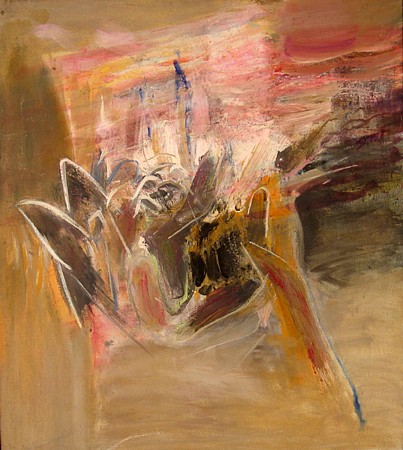 Holly Johnson Gallery in Dallas unveils an exhibition of new work by Texas' most influential artist, Richard Stout, as well as a selection of paintings from the 1950’s. An opening reception for the artist will be held on Friday, October 20, from 6:00 to 8:00 p.m. The exhibition continues through Saturday, November 25, 2006.

In 2001, Dr. Edmund Pillsbury writes, “Inspired by Giacometti, Ernst and other Surrealist works on view at the Menil Collection but possessing an understanding of the powers of landscape that is almost mystical, Richard Stout stands apart. He is an artist of our time, but through his works he transports us to places near and far, making us appreciate the world in fresh ways and bringing a set of emotions into our experience of daily life that, albeit clouded in mystery, is both reassuring and uplifting. He is a worthy successor to his Romantic forbearers, Turner and Delacroix, whose goal superseded any traditional concept of beauty in favor of effects that can only be described as Sublime.”

And in Sculpture magazine (May 2006), Ileana Marcoulesco writes, “The sculptures appear to explore a space of intimate events – in spite of their rhetorical titles, compiled from grand mythological narratives...they are heavy, complex, versatile three-dimensional shapes. Ascetic in appearance, cryptic in connotation, yet free-wheeling, they speak a private language of passions and are hard to penetrate, except intuitively.”

Stout was born in 1934 in Beaumont, Texas. He began his formal art training in the 1950’s at the Academy of Art in Cincinnati and at the Art Institute of Chicago where he received a B.F.A. degree in 1957. Stout then earned an M.F.A. from The University of Texas, Austin, in 1969. For over twenty years, he served on the faculty of the University of Houston as a professor of painting, helping to establish the highest standards of art instruction in the region.

As early as 1951, Stout’s work appeared in group shows, and his one-person exhibitions span nearly five decades, from 1958 to the present.  In the years since his first solo exhibition, Mr. Stout’s work has been exhibited throughout Texas, across the United States, as well as abroad in Norway, Germany, Iran, Shanghai, and Switzerland. His work is in various museum collections, including The Art Museum of Southeast Texas in Beaumont; Butler Institute of Art in Youngstown; Huntington Gallery at the University of Texas in Austin; Kupferstichkaabinett, Museum of Fine Art in Dresden; The McNay Museum in San Antonio; The Menil Collection in Houston; Museum of Fine Arts, Houston; and many private collections.