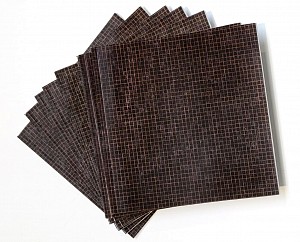 Duino Elegies is a 40 page fully illustrated catalogue published on "Theresa Chong: Duino Elegies" at Holly Johnson Gallery in Dallas from November 2021 - February 2022. The catalogue features an essay by David Brody, as well as the eleven works from the exhibition...

Holly Johnson Gallery is pleased to announce the opening of Margo Sawyer: Synchronicity – Kosovo Muse, an exhibition of suspended glass works and window installation. The exhibition draws inspiration from Sawyer’s, immersive architectural glass spiral sculpture entitled Synchronicity of Color for Kosovo, commissioned by the US State Department: Art in Embassy Program, for a site-specific sculpture for the U.S. Embassy in Pristina, Kosovo in 2018. Sawyer will discuss her work at 4:30 p.m. Saturday, April 9, followed by a reception until 8:00 p.m... 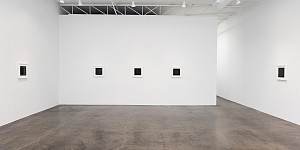 At some point in our miraculous and fragile lives, we will lose something or someone. We master the art of losing daily. Even with all of life’s celebrations, breakthroughs, and fresh starts, someone always dies in January. Grief, then, is recursive and our relationship with it is inevitable. So how do we come to terms with grief? How do we manage life knowing there are no sharp distinctions between exits and exists?

When I learned of artist Theresa Chong’s exhibition Duino Elegies at Holly Johnson Gallery in Dallas, I recalled the first time I read Rainer Maria Rilke’s poetry book of the same title. Rilke’s collection of ten elegies—written more than 100 years ago while he was a guest of Princess Marie von Thurn und Taxis at Duino Castle near Trieste, Italy on the Adriatic Sea—is full of outstanding devastation. With the prevailing deaths from COVID-19, blinding insurrections, and ravaging injustice, the Duino Elegies seem sadly and remarkably fitting for our time... 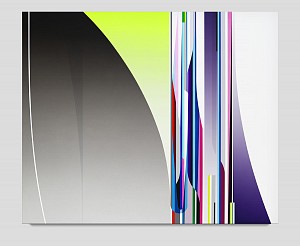 Visual elements dance across the spectrum in strong verticals that simultaneously divide and superimpose upon wide expanses of color. These oscillating forms appear to be in motion and usually compress into one side of each painting. The effect is that of a sky-borne prism of visual rays that seem to lack both origin and telos, that is an ultimate purpose, but exist eternally... 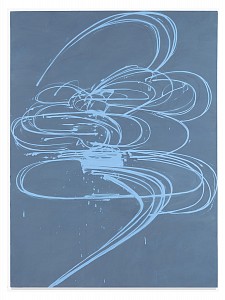 Holly Johnson Gallery is pleased to announce the release of a catalogue on the occasion of Dion Johnson's show, "Vibrant". Essayist, Annabel Osberg, writes "Dion Johnson’s abstract paintings bristle with chromatic resonance.  Warm and cool grays and whites set off variegated curtainlike structures of contrasting stripes of carmine, cyan, gamboge, chartreuse, sea green, ultramarine violet, and a dizzying array of other hues too numerous to name.  Sinuous color shifts perform hairpin switchbacks up and down these factitious vertical rainbows, dazzling the eye with their optical oscillations.  The drama is heightened by fields of atmospheric color in paintings such as Shadow (2021), where translucent curvilinear shapes seem to emerge and recede like umbras, reflections, or even rays of light refracted through phantom windows"...

Holly Johnson Gallery in Dallas is pleased to announce an upcoming exhibition by Los Angeles – based artist Dion Johnson. ‘VIBRANT’ marks the artist’s second solo show at the gallery and features ten new paintings. An exhibition catalogue written by Annabel Osberg will be available. An artist’s talk will be held at 5 p.m. on Saturday, January 8th, followed by the opening reception until 8 p.m... 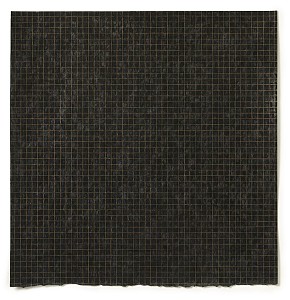 Holly Johnson Gallery is pleased to announce the opening of Theresa Chong: Duino Elegies, an exhibition of works on paper inspired by Rainer Maria Rilke’s, the Duino Elegies. The exhibit will be accompanied by a fully illustrated catalogue with an essay by David Brody. An open house will be held on Saturday, November 20, from 5 to 8 p.m. The exhibition continues through February 12...

ARTICLE: Matthew Cusick Illustrates "Manifestations on the myth of the voiceless" in Orion Magazine

It is very rare today for the word brute to be used in the way it was in the past. Nobody refers to animals, let alone to people or races, as brutes anymore; nobody even cries out “you brute!” as characters so often do in Victorian novels.

But even as the original coinage fades from everyday usage, its derivatives, like brutal and brutality, have become ubiquitous—on the internet, in newspapers, and on signs protesters carry through the streets as they chant “Black Lives Matter!”—for police brutality is, of course, at the heart of the protests.

The current ubiquity of the word brutality is an indication of a stunning reversal: no longer is this domain of meaning configured around the savage or the semicivilized; it is centered instead on the repressive machinery of the state, primarily the police. The inversion of meaning establishes an etymological arc that links the planetary crisis directly back to processes of colonization, enslavement, and biopolitical war.... 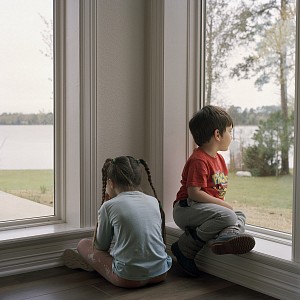 North Texas photographer Misty Keasler turns her camera on the rituals of pandemic life. In her latest body of work, “Sanctuary Dispatches,” Keasler offers an intimate look at her family’s isolation.

The pandemic redefined what home meant. For many Americans, the definition expanded to include all facets of our life. It was where we worked, relaxed, and were alone. It was where we came together (when it was safe), celebrated and grieved...