David Aylsworth: Is it the real turtle soup? 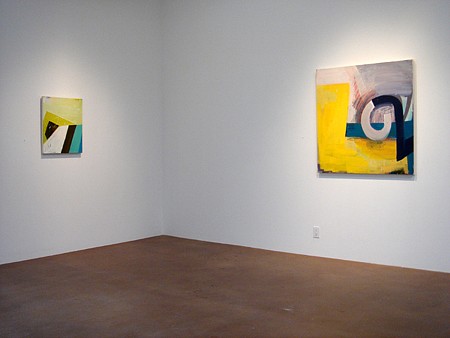 Holly Johnson Gallery in Dallas, Texas is pleased to announce the opening of Is it the real turtle soup?, an exhibition of new paintings by David Aylsworth. In this new body of work David Aylsworth continues to reference the excitement and frivolity of musical theater.  Less about Broadway than interaction, shapes invade, surround, and overlap one another creating a frenzied dance between the elements.  Bold brushstrokes are masterfully paired with scraped transparent paint where color and shape take center stage. An opening reception honoring the artist will be held on Saturday evening, November 22, from 5:00 to 8:00 p.m. The exhibition continues through Saturday December 24, 2008.

The exhibition title as well as the painting of the same name, Is it the real turtle soup?, allude to Cole Porter’s “At Long Last Love”, written in 1938.

Is it an earthquake or simply a shock?

Is it the good turtle soup or merely the mock?

Is it a cocktail, this feeling of joy?

Or is what I feel the real McCoy?

Is it for all time or simply a lark?

Is it the Granada I see or only Asbury Park?

Is it a fancy not worth thinking of?

Or is it at long last love?

For Aylsworth, the creation of a painting is equated to the direction of a theatrical performance.  “The forms I am drawn to paint usually involve a cluster of “characters” that interact with each other in a specific, but not easily identifiable manner in a theatrical setting that is equally specific, but not easily identifiable,” Aylsworth says, “To bring the non-verbal interaction to an audience, I quote others’ words when I give the painting a title—most often referencing lyrics from musical theater, the art form traditionally and stereotypically associated with gay men.  Plucked from their intended context, they reference the music and plot of their source while defining a new, personal activity and space within the painting.”

David Aylsworth was born in Tiffin, Ohio in 1966. He received a B.F.A. degree from Kent State University in 1989.  From 1989 to 1991 he participated in the Core Fellowship and Residency Program at the Glassell School of Art, Museum of Fine Arts, Houston. In 2001, The Galveston Art Center mounted a ten-year survey of his work and it later traveled to Texas A&M University in Commerce and the University of Arkansas in Fayetteville. In 2008 his work was included in a group exhibition, Learning by Doing: 25 Years of the Core Program, at the Museum of Fine Arts, in Houston.  His work was also featured in a solo exhibition of new paintings, Fugue for Tinhorns Sounds like Frère Jacques, at the Ellen Noël Art Museum in Odessa, Texas from September to November of 2008.

In 2005, Aylsworth was awarded an Individual Artist Grant from the Cultural Arts Council of Houston/Harris County. Articles about his work have been published in noteworthy publications such as; Art Lies, Art in America, House Beautiful, The Dallas Morning News, and Fort Worth Star – Telegram. His paintings can be seen in the permanent collections of the Museum of Fine Arts, Houston, the Dallas Museum of Art, The Art Museum of South Texas in Corpus Christi, The Art Museum of South East Texas in Beaumont, and the El Paso Museum of Art.  David Aylsworth resides in Houston, Texas.