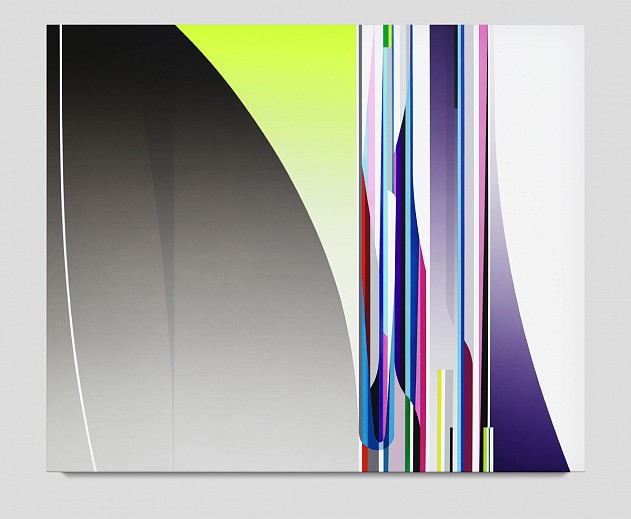 Visual elements dance across the spectrum in strong verticals that simultaneously divide and superimpose upon wide expanses of color. These oscillating forms appear to be in motion and usually compress into one side of each painting. The effect is that of a sky-borne prism of visual rays that seem to lack both origin and telos, that is an ultimate purpose, but exist eternally.

Johnson composes each painting in Photoshop, creating a “blueprint,” that he subsequently transfers to canvas. His use of drywall tools, spray guns, and spatulas suggest his role as both a master builder and designer of compelling objects. They harken back to the early days of abstraction, when constructivists and artists affiliated with De Stijl used mathematical formulas to derive their designs. They sought to build a utopia; but here, no formula exists to describe the universe that each painting presents.

They demand a reading from left to right, or vice versa, while the elements proceed along a musical rhythm, superimposed over sections with truncated parabolic arcs that don’t proceed along a repetitive sequence but appear to be seeking one.

This is observable in “Honey” where the left side of the canvas presents a yellow expanse bordered by an arc that looks like it wants to refer to another one that starts to exit the canvas on the right (you could also read it the other way around). This happens again in the much larger “Vampire,” only this time in gray to the left and white on the right with the vertical stripe phrases compressed in between.

In the compelling “Waterfall” the arcs come together from either side of the canvas only to disappear within the confluence of stripes aggregated in the left half of the picture plane. A reference to water completes the metaphor of a falling deluge funneling into a vortex that brings nature and organic life into the lines of color, whose various juxtapositions represent a vividly imagined reality.

In his exploration of motion, compression, expansion, and depth of field, there is an insistent demand that we consider Johnson’s use of scale through the elemental interaction of color and line. Quite a tall order in a world where the geometric and structural underpinnings, that determine society as we perceive it, are relentlessly blurred and softened by the current state of our image saturated, undeniably constructed reality.

John Zotos is an art critic and essayist based in Dallas.