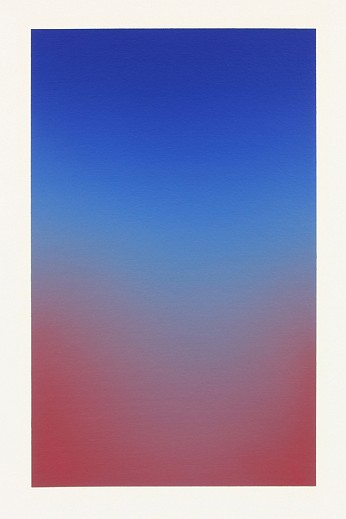 Holly Johnson Gallery is pleased to present Eric Cruikshank’s exhibition, THE SKIES WINDOW, representing a selection of fifteen oil on paper and canvas paintings created during the past year. An open house will be held Saturday, February 20th, from 11:00 to 5:00 p.m. This is the artist’s second solo exhibition with the gallery, and it will continue through May 8, 2021.

Taking landscape as an initial starting point, Eric Cruikshank’s paintings are not about literal presentation; instead, the focus is on the emotive qualities of place. Using an objective palette tied to the Scottish landscape, color acts as a vehicle to reveal the picture planes underlying points of reference. With the structure, design, and color harmony being grounded in the everyday, the viewer is encouraged to readdress notions of their surroundings, where the familiar is opened and made full of possibility.

By applying the paint in thinly layered color bands, and utilizing a subtraction technique, the surface is worked until a balance is reached. The delicate forms that remain give the effect of a monochromatic finish when first viewed. Through the resulting veil of paint, shimmering traces of tone flicker on the edge of focus, where the surface holds the gentlest luminosity and modulating volume. The works are completed with a meticulous level of control, creating a plane that bears no brush marks, removing evidence of the hand of the artist and any imprint of technique. With this removal, the color field comes under closer scrutiny - on approaching the work, color pulses in constantly shifting patterns, on withdrawing, these patterns blend, bleed and fuse into a vibrant continuous field, inviting a highly tuned visual attentiveness.

Eric Cruikshank was born in Inverness, Scotland (1975). He received a BA (Hons) in Painting and Drawing from the Edinburgh College of Art in 1997. Cruikshank’s works have been included in numerous exhibitions in cities such as London, Paris, Berlin, Bonn, Gothenburg, Edinburgh, Basel, Zurich, Inverness-shire, Santa Fe, and now in Dallas. He has been the recipient of several prestigious awards including an Oppenheim-John Downes Memorial Trust Award (2016), an Edinburgh Council Visual Artist Award (2014), a Hope Scott Trust - joint award with Michael Craik (2013), and a Pollock-Krasner Foundation Grant (2009), among others. He has also participated in several residencies: the Mustarinda Residency, Finland (2012) and the Santa Fe Art Institute Residency (2010). He currently lives and works in Dundee, Scotland.

Holly Johnson Gallery is located at 1845 Levee Street #100 in Dallas, TX 75207. Gallery hours are 11:00 to 5:00, Tuesday through Saturday, and by appointment. The gallery is a founding member of CADD - Contemporary Art Dealers of Dallas. For more information about this exhibition, please call 214.369.0169, or email info@hollyjohnsongallery.com, or visit www.hollyjohnsongallery.com.