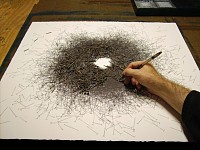 John Adelman follows rules that dominate his mark-making, his exploration of subject matter, and even his tools - which are almost exclusively limited to black, blue, and white gel ink pens. These works are accumulative and compulsive, and anything but austere. Intricate and labor-intensive; they also portray how far he is willing to go to follow the rules and achieve order. He often deploys the dictionary and its definitions as source material, yet also adheres to the rigors of chance, outlining tens of thousands of objects as they fall on his page. With his use of unconventional materials and his obsessive method, Adelman's work could easily be overly simplified, if it weren't for the understated beauty in the results.

Adelman received an M.F.A. in Drawing and Painting from the University of North Texas, Denton, Texas (2006) and a B.F.A. in Drawing, Painting, and Printmaking from The Ohio State University in Columbus, Ohio (1992). He currently resides in Houston, Texas.