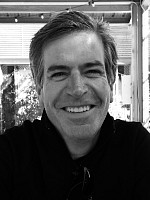 For the past twenty years, color, space, and architecture have been primary sources of inspiration for Tommy Fitzpatrick's paintings. In 2013, he began creating sculptural assemblages in the studio that were stand-ins for the architecture. Most recently, Fitzpatrick is using computer-aided design (CAD) programs as the blueprint for the painted imagery. Because of this digitally dominant process, he is now leaving more evidence of the hand, by adding texture, and thickness of paint on the surface in addition to his hard-edge techniques. By combining digital and analog processes, Fitzpatrick is creating work that instigates a conversation between what it is and how it is made. This new approach to painting makes the meticulously painted geometric shapes appear as if it were hovering atop the canvas.

Born in Dallas in 1969, Tommy Fitzpatrick received a B.A. in Fine Art from the University of Texas in Austin in 1991, followed by an M.F.A. from Yale University School of Art in 1993. His work has been included in numerous solo and group exhibitions in Dallas, Houston, New York, Madrid, London, Berlin and Seoul. His paintings are in the collection of the Museum of Fine Arts, Houston, the Modern Art Museum of Fort Worth, the Art Museum of South Texas in Corpus Christi, and the Menil Collection in Houston. He is currently an Associate Professor of painting at Texas State University in San Marcos, Texas. He resides in New Braunfels, Texas.