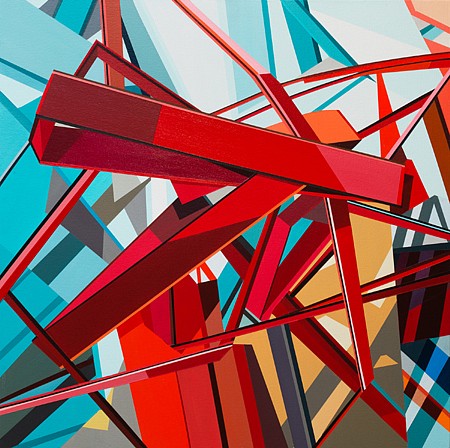 Holly Johnson Gallery in Dallas is pleased to announce the opening of "Gordian Knot", an exhibition of ten new paintings by Tommy Fitzpatrick. An opening reception for the artist will be held Saturday, September 6, from 6:00 to 8:00 p.m. The exhibition continues through November 15.

Tommy Fitzpatrick's works have progressed in the precise, flat style he has used since the late 1990's. After a decade or more of painting abstracted photo based works of glass and steel façades of buildings, the focus has shifted and his work explores exciting, new territory.

Bill Davenport, editor of Glasstire, said it best in 2013, "...Fitzpatrick has finally reached a point where the existing world isn't supplying suitable source material--the jumping off point where many artists choose abstraction... Rather than invent pictures of the funky, quasi- mathematical objects he's interested in painting, which would be outside of his self-consistent rules, he has adopted a quirkily indirect, but completely obvious method: he invents the objects themselves, building them from scrap lumber, then paints pictures of them in his accustomed manner."

Born in Dallas in 1969, Tommy Fitzpatrick received a B.A. in Fine Art from the University of Texas in Austin in 1991, followed by an M.F.A. from Yale University School of Art in 1993.His work has been included in numerous solo and group exhibitions in Dallas, Houston, New York, Madrid, London, Berlin and Seoul. His work is in the collection of the Museum of Fine Arts, Houston as well as the Modern Art Museum of Fort Worth. This exhibition marks the artist's third solo show at Holly Johnson Gallery. Fitzpatrick is currently an Assistant Professor of painting at Texas State University in San Marcos, Texas. He resides in Austin.

Holly Johnson Gallery is located at 1411 Dragon Street in Dallas' Design District. Gallery hours are 11 to 5, Tuesday - Saturday. The gallery is a founding member of CADD - Contemporary Art Dealers of Dallas. For information call 214-369-0169 or email info@hollyjohnsongallery.com or visit www.hollyjohnsongallery.com