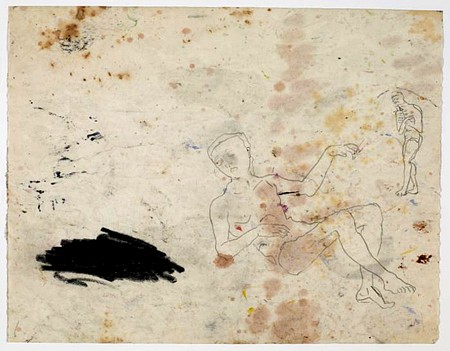 Holly Johnson Gallery in Dallas is pleased to announce the opening of Forty One Songs, an exhibition of New Drawings by Gael Stack. A reception and book-signing for the artist will be held Saturday, October 15th, from 6:00 to 8:00 p.m. The exhibition continues through November 12, 2011.

Gael Stack's new drawings continue to explore the ephemeral nature of memory and the past's implacable hold on the present. Her work incorporates fragments of words and images, often layered over one another to create a visual language with which she has made duration visible. Raphael Rubinstein likens her works to Freud's "mystic writing-pad," a surface layer that can be endlessly written upon, erased, and refilled, while the underlying tablet retains traces of all that has been written-an apt metaphor for the workings of perception and memory.

In October the University of Texas Press will unveil Gael Stack, the first retrospective monograph on the artist's career, which has spanned four decades. It includes nearly one hundred fifty works reproduced in full-color, with a foreword by Rackstraw Downes - realist painter and 2009 MacArthur Fellow.  Accompanying the images is an essay by Raphael Rubinstein - a poet, author, and contributing editor at Art in America, and an essay by Alison de Lima Greene, curator of modern and contemporary art at Museum of Fine Arts, Houston.

In the 1970's, Stack received a BFA from the University of Illinois in Urbana and a MFA from Southern Illinois University in Carbondale.  Her work has appeared in numerous group exhibitions such as the Contemporary Arts Museum's, Perspectives @ 25: A Quarter Century of New Art in Houston (2005), Texas Vision: The Barrett Collection at SMU's Meadows Museum in Dallas (2004), Establishment and Revelations at what is now the Dallas Contemporary (1997), and Three Visions which originated at Centro Cultural Borges in Buenos Aires, Argentina (1996). Numerous solo exhibitions include: Musée des Beaux Arts, L'Echevinage, Saintes, France (1995), Musée de Niort, France (1996), and Gael Stack: A Survey 1974 - 1989 at the Dallas Museum of Art (1989).

Stack has exhibited in museums and galleries around the world. Her work is in numerous collections, including the Beaux Art Museum, Saintes, France; Solomon R. Guggenheim Museum, New York; Yale University Art Gallery, New Haven, Connecticut; Krannert Art Museum, Champaign, Illinois; the Museum of Fine Arts, Houston; and the Menil Collection, Houston. She is the John and Rebecca Moores Professor of Art at the University of Houston, where she formerly headed a department that has become the region's premier training ground for the visual arts.