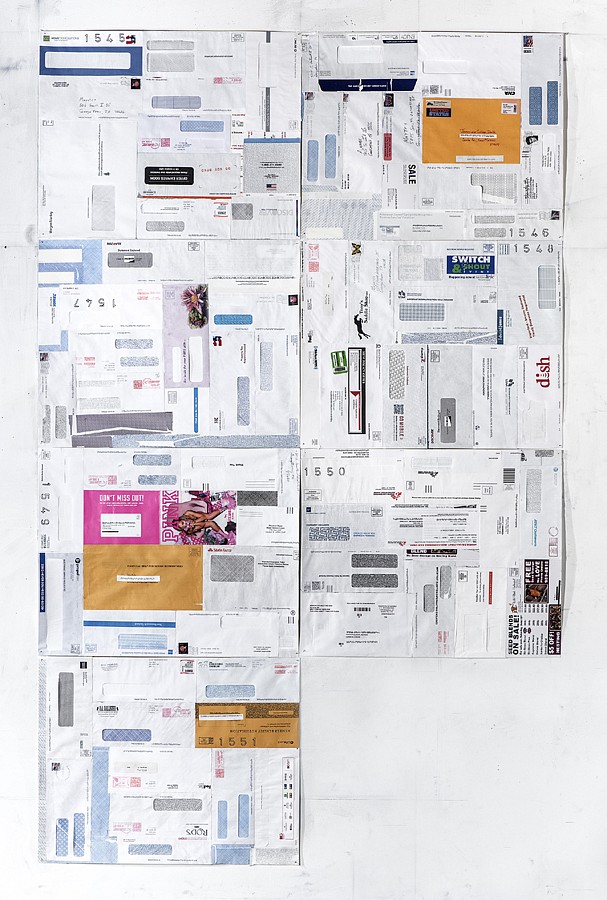 Holly Johnson Gallery in Dallas is pleased to present “Flocking Shoaling Swarming (Blue Kiss)”, a selection of new collages comprised of envelopes by the internationally acclaimed artist, James Drake. An opening reception will be held Saturday, October 15th from 5-8 pm. The exhibit continues through December 23.

For more than 40 years, James Drake has considered the vast and abstract against the singular and specific in his multivalent artwork. Moving comfortably between media – video projection, drawing, welded sculpture, photography and printmaking – he defies a ready, singular style. Instead, Drake maps a space of humanity toggling between the languages of physics and poetry, illustrated by images of current events and cultural history.

The nine collage works in the exhibition are the result of Drake’s relationship with the evolving idea of mail and communication. He is drawing and writing on envelopes that he has mounted on archival paper. “It just made sense to have letters on letters” Drake says, “Mail will probably, eventually, be a thing of the past, but when I grew up it was this ubiquitous thing that everybody got, whether it was bills, ads, letters. I like this idea that it’s general and specific at the same time.”

James Drake was born in Lubbock, Texas in 1946. He holds a BFA and an MFA degree from the Art Center College of Design, Los Angeles. Drake is the recipient of a John Simon Guggenheim Memorial Foundation Fellowship and two grants from the National Endowment for the Arts. His work was included in the 2000 Whitney Biennial, the 2007 Venice Biennial “Think with the Senses Feel with the Mind” curated by Rob Storr and has been extensively collected by museums throughout the United States. His work has also been featured in numerous solo exhibitions including; the Lannan Foundation, Blanton Museum of Art, Museum of Contemporary Art San Diego, New Mexico Museum of Art, DiverseWorks , SITE Santa Fe, Corcoran Gallery of Art, La Jolla Museum of Art, Contemporary Arts Museum Houston, and the Alternative Museum.

The exhibition, James Drake: Anatomy of Drawing and Space (Brain Trash) opens September 29 at the El Paso Museum of Art. The exhibition was previously on view at the Museum of Contemporary Art San Diego and the Blanton Museum.