William Betts: Inside Out 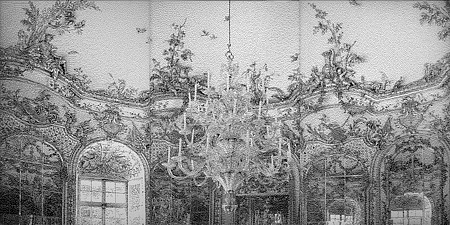 Holly Johnson Gallery in Dallas is pleased to announce the opening of Inside Out: New Paintings by William Betts. A reception for the artist will be held Saturday, February 18th, from 6 to 8 pm. The exhibit continues through May 5th.

In Inside Out, the artist has created paintings of both outdoor and interior spaces selected for scale and depth and the space relative to the viewer. He selected the spaces specifically to explore and better understand the relationship between the viewer, the paintings, and the context in which the work is viewed. The subject matter of the exhibition is broad in scope yet all of the images speak of containment, having strong formal qualities as well as layers of depth and complexity. Whether a lyrical rococo interior or a deep impenetrable forest, these spaces embrace us in a defined realm and envelop viewers into the story.

For more than a decade the artist has focused his practice on software-controlled processes he developed for applying paint. He uses industrial production methods to achieve a level of precision that allows him to manipulate and corrupt specific aspects of process. He has created this new body of work by drilling hundreds of thousands of holes in the back of acrylic mirrors and filling them with white paint drops. Though automated, the technique is exacting and time consuming. The imagery is incomplete and resolves itself only with the reflection. The use of the mirrored surface to complete the work does by its very nature act upon the space, its impact shifts based on interactions and point of view.