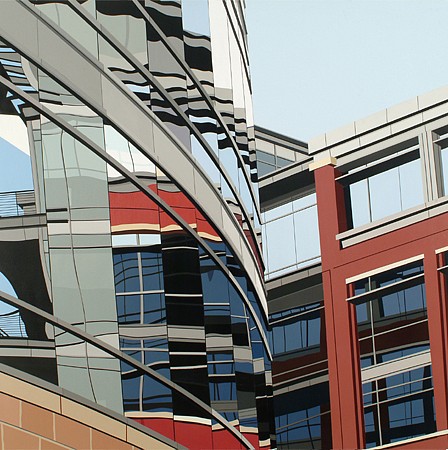 Holly Johnson Gallery in Dallas, Texas is pleased to announce the opening of Facade an exhibition of eight new paintings by Tommy Fitzpatrick. An opening reception for the artist will be held on Friday, July 28, from 6 to 8 p.m. The exhibition continues through September 9, 2006.

In this new body of work Tommy Fitzpatrick continues to scrutinize facades of corporate structures, specifically buildings in Dallas and Fort Worth.  The paintings showcase the artist’s increasing interest in using the curtain wall as a mirror of glass to reflect and distort the world around it while merging aspects of illusionism and geometric abstraction into one image.

Fitzpatrick works from photographs and constructs each painting by using tape and acrylic paint. He strongly emphasizes color relationships while maintaining an optical tension.  According to the artist, "I have always considered painting to be a type of building process. Architecture and its modular structure runs parallel to what I see as the act of painting. The curtain wall creates a relationship similar to painting. Both are mirrors each serve as skins to an underlining structure beneath."

In 2004, Clint Willour, Curator of the Galveston Arts Center, organized, Object Lessons, a survey of Fitzpatrick's work. The exhibition of nearly thirty paintings from 1997 to 2004 traveled to The Galveston Arts Center, Texas A&M-Commerce, and The Arlington Museum of Art. The exhibition was documented with a catalogue and an essay by artist/writer Christopher French. "In Fitzpatrick's hands," French writes, "the architectural style pioneered by Mies van der Rohe as one of the pivot points of modernism becomes both a window on the world and a funhouse mirror through which we can see the towering impersonality of our own present tense." Fitzpatrick was born in Dallas in 1969.  In 1991, he received a B.A. in Fine Art from University of Texas in Austin, followed by an M.F.A. from Yale University School of Art in 1993. His work is in the collection of the Museum of Fine Arts, Houston as well as the Modern Art Museum of Fort Worth.  This exhibition marks the artist’s first solo show in Dallas area. He is represented by galleries in Houston, New York, and Berlin.