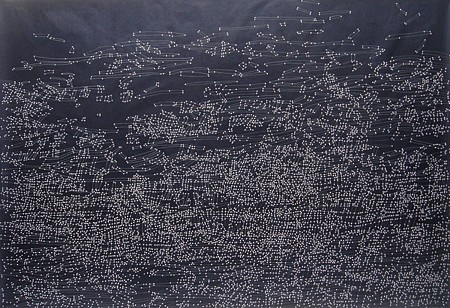 Holly Johnson Gallery is pleased to announce the opening of Theresa Chong: Drawings, an exhibition of recent works on paper by the acclaimed New York based artist. A reception for the artist will be held on Saturday, February 23, from 6-8 pm. The exhibition continues through May 11.

Theresa Chong’s delicate works on rice paper consist of meandering lines punctuated by minute painted elements that convey a sense of rhythm, meter and lyric beauty. References to opera, architecture, calligraphy, and literature abound in her work, but at its core, it remains fundamentally abstract. The work of the abstract expressionists - their energy and spontaneity, as in the work of de Kooning and Pollock - and pop artists - particularly the clarity of line in the work of Lichtenstein - act as powerful influences as well.

Music acts as a further catalyst for Chong, who studied the cello at Oberlin College and, as a graduate student at the School of Visual Arts, came under the influence of John Cage. While working in New York for composer/conductor Peter Kotik, Chong had the opportunity to meet Cage several times; Cage's use of chance in his music, as a way of expanding the range of sound, considerably affected her approach to art. Chong’s special brand of spontaneity is evidently musical in origin, but not in its scope or aim. The ephemerality of her paper and marks, bearing the working methods, care and meticulousness of a cartographer, prevents such oversimplification, offering viewers a range of psychological and aesthetic experiences. Aside from its inherent preciousness and fragility, paper and its specific selection is of great importance to the artist. Indeed, it took a decade-long scavenger hunt to find a supply of a much beloved indigo-dyed paper.

Chong participated in the faculty residency program at the Anderson Ranch in Colorado in 2003 and 2005. She was awarded a grant from the Sam and Adele Golden Foundation, and has received fellowships from the New Jersey State Council on the Arts and NYFA (New York Foundation for the Arts). Numerous articles have been written about her work in publications such as; The Boston Globe, Art in America, The New Yorker, Art Asia Pacific, Style Weekly, The New York Times, Artnet Magazine, LA Weekly, and Flash Art.