Christopher French: As the Land and the Air is 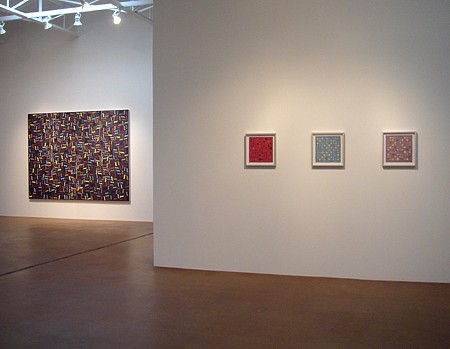 Holly Johnson Gallery in Dallas is pleased to announce the opening of, As the Land and the Air Is, an exhibition of new paintings and works on paper by Christopher French. A reception for the artist will be held Saturday, May 2, from 6-8 p.m. The exhibition continues through June 6, 2009.

Christopher French’s latest body of work, T-Top Paintings, uses the top of the “T” in the New York Times masthead logo as a starting point for each painting.  About it, the artist says, “I love the way its sinuous asymmetricality holds color.”  Each painting features dozens to hundreds of “T-Tops” on uniform backgrounds that push forward the color and iconography of the typeset, barely recognizable in a sea of identical forms.

Also featured in the show are paintings and works on paper from the ongoing body of work, Color Culture (2003- Present). These works are comprised of paintings on Braille paper. “I’ve been painting on Braille paper since I found a book of it on the streets of New York in 1986. My initial interest was textural but textual possibilities quickly took over.” As the work evolved, the Braille was used less for its textual qualities and more for the grid inherent in the Braille, which the artist used to organize circles of color, each of a subtle size and tonal variation.

French is known foremost as a painter, but also as a curator, arts administrator, art critic, and teacher of art. He was born in St. Louis in 1957, grew up in Sacramento, and lived for many years in Washington D.C. and Texas. In 2007 he moved to Water Mill, New York, on eastern Long Island. His work has been widely exhibited in Texas, on both coasts, and abroad. He has received a Cultural Arts Council of Houston and Harris County Fellowship (2003), a Joan Mitchell Foundation Fellowship (1999), a Cité Internationale des Arts Residency Grant (1996), and a National Endowment for the Arts Fellowship (1993). In 2003 the Galveston Art Center organized a twelve year survey of the artist’s work. The exhibition traveled to Southwestern University in Georgetown, TX and Stephen F. Austin University in Nacogdoches, TX.

His work can be found in the Washington D.C. collections of the Corcoran Gallery of Art, the Goethe-Institut, the Hirshhorn Museum and Sculpture Garden, and the National Museum of American Art, as well as corporate collections: Hewlett-Packard, Progressive, and Sallie Mae, Inc.  In early 2009, The Museum of Fine Arts, Houston acquired a suite of four paintings for their permanent collection. Recent articles on his work include reviews in The Washington Post, Art Papers, Artlies, ARTnews, Houston Press, Glasstire, Los Angeles Times, Tema Celeste, and many others.