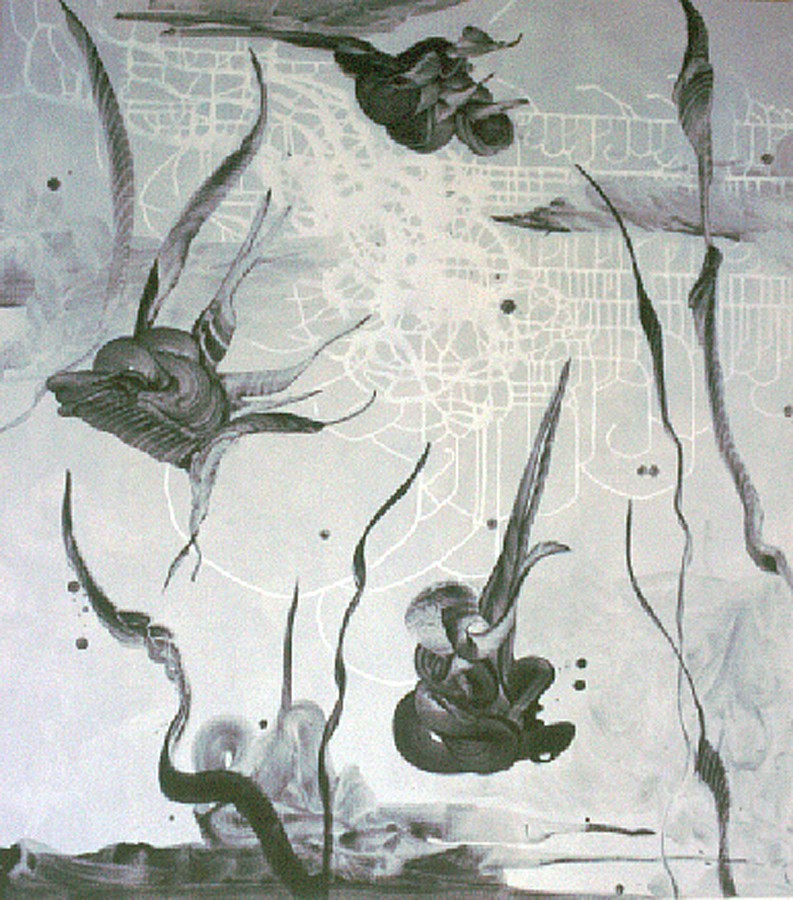 Holly Johnson Gallery in Dallas, Texas is pleased to announce the opening of Constant Rhythm, an exhibition of new work by Virgil Grotfeldt. A reception and book-signing for the artist will be held on Friday evening, February 17, from 6:00 to 8:00 p.m. The exhibition continues through Saturday, March 25, 2006.

Since the mid 1970’s, Virgil Grotfeldt has had a career with connections reflecting both American and European art and philosophy.  From the early 1990’s to the present, he has produced works of art with mystical and anthropological imagery influenced by the German artist Joseph Beuys and despite a certain appearance of restraint, his work is also deeply expressionistic with affinities to such painters as Odilon Redon and the writer and artist Victor Hugo. Developed intuitively, rather than as a consequence of planning or strategy the works are executed with experimental materials such as coal dust on found materials, the works can be increasingly complex or barely interfering with the preexisting nature of the found materials. Suspended in an aqueous-based medium, the coal dust can be drawn and brushed to conceive extraordinary forms giving his work a unique three-dimensional aspect. According to the late Walter Hopps, “Not since the early Pollock or the late Arshile Gorky have I seen the dimensionally modeled forms as in the biomorphic abstraction of Virgil Grotfeldt. Nature and abstract form define Grotfeldt’s art as well as sustain its value as a personal meditation upon essential life forces.”

Virgil Grotfeldt graduated in 1971 with a B.S. from Eastern Illinois University followed by an M.F.A. in 1974 from the Tyler School of Art in Philadelphia.  He has been the recipient of many prestigious awards such as Texas Artist of the Year 2003, presented annually by the Art League Houston, a grant in the visual arts from the Pollock-Krasner Foundation, Inc. in 1999 and The Engelhard Award in 1991.  His work resides in many private and public collections, including The Menil Collection, Houston, Texas; Whitney Museum of American Art, New York, New York; NOG Insurance Company, Amsterdam, The Netherlands; Free International University World Art Collection, Zeist, The Netherlands; Museum of Fine Arts, Houston, Texas; Tyler Museum of Art, Tyler, Texas; and Upriver Gallery Collection, Chengdu, China.

Virgil Grotfeldt: Including the series with Waldo Bien, published by FIUWAC will be available for sale at the book-signing. The 208 page monograph with 429 color illustrations is written by Patrick Healy, Professor of Interdisciplinary Research at Free International University in Amsterdam and Architecture Theorist at Delft University of Technology with an introduction by the late Walter Hopps, former 20th Century Curator of The Menil Collection and the Guggenheim Museum.