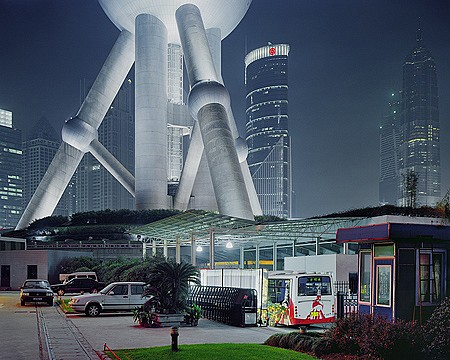 Holly Johnson Gallery in Dallas is pleased to present Mike Osborne’s “Enter the Dragon”, a new group of photographs taken while the artist was at work on a year-long Fulbright Fellowship in China and Taiwan. A reception for the artist will be held Saturday, September 8, from 6:00 to 9:00 p.m. The exhibition continues through October 13, 2007.

“Shooting in China and Taiwan, I found myself focusing on aspects of the public sphere that, perhaps somewhat paradoxically, fascinated me as a cultural outsider without necessarily being quintessentially ‘Chinese’ or ‘Taiwanese’ either. My pictures convey little sense of China’s 5,000 years of cultural history or Taiwan’s colonial past. I just couldn’t get over Beijing’s big broad streets, the over-sized ads, the sprawling construction, and the new buildings. One associates this breed of spectacle less with Communist rule than with capitalist economies. I suspect the things my pictures fixate on are every bit as foreign-seeming to many Chinese as they were for me.”

Between 2003 and 2005, Osborne photographed the construction of monumental highway interchanges throughout Texas and California, depicting them in a way that simultaneously evoked miniature models, science-fiction film sets, and ancient ruins that captivated nineteenth-century European photographers. In his new work from China and Taiwan, he takes this inquiry in new directions, exploring street-life, urban upheaval, and the recent proliferation of ultra-modern architecture in major Asian cities. Among Osborne’s new images, we catch glimpses of Taipei’s 101, Shanghai’s Pearl TV Tower, Beijing’s Olympic Stadium, and China Central TV Headquarters; but far from being strict documentary records of these contemporary icons, Osborne’s pictures constitute a kind of photographic game in which vantage point, lighting, and images couched within images combine to disrupt our sense of scale and confound our certitudes about photographic “reality” and “representation”.

"These new works extend Osborne’s related explorations of environments undergoing radical modernization and distortions of scale in urban settings. The images also demonstrate a sustained consideration on the role of the wall as a photographic device, both as a divider of space and as a surface that holds text and reflects light."

Osborne received a B.A. in English from Stanford University (2000), and an M.F.A. in Studio Art from the University of Texas in Austin (2006). His work is in the collection of The Austin Museum of Art as well as numerous private collections. He is a recent recipient of a Fulbright Scholarship to Taiwan (2006-7), and will be a Resident Artist at the Akademie Schloss Solitude in Stuttgart, Germany (2008-9). In 2004 He received an Artpace Travel Grant, a Puffin Foundation Grant, and two Presidential Scholarships from the University of Texas. Osborne’s “Press Pictures” were featured on the cover and in the “Visual Space” section of Artlies Summer 2006 issue. In 2005-2006 his work from “Interchanges” was included in, “22 to Watch: New Art in Austin”, which traveled to Dallas Center for Contemporary Art, Austin Museum of Art, and Galveston Arts Center, and curated by Austin Museum’s Director Dana Friis-Hansen; Austin Museum’s adjunct curator James Housefield; Austin Museum’s Director of Exhibitions/Education Eva Buttacavoli; Dallas Center for Contemporary Art’s Director Joan Davidow; and Galveston Arts Center’s Curator Clint Willour.