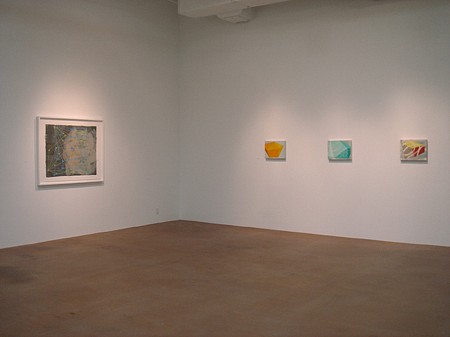 Holly Johnson Gallery in Dallas is pleased to announce the opening of, David Row: Flat Volumes, an exhibition of recent paintings. A reception for the artist will be held Saturday, April 2, 2011, from 6 to 8 pm. The exhibit continues through May 14.

David Row is an artist who has spent nearly 25 years devising abstract paintings that seek to capture the tenor and grit of contemporary experience. He has developed a stunning visual vocabulary derived directly from the building blocks of art making: ­ line, composition, and form. Skirting on the edges of intense passion and the precession of technology, Row's paintings are as seductive as they are layered with sharp lines and scraped surfaces; all creating rich tapestries of color and contrasting tones. His trademark undulating curvilinear strokes seem contained only for a moment by the edges of the canvas, and then pass out of view — extending to some infinitely distant destination.

Row has shown regularly in New York City since the early 80’s, as well as in France, Japan, Germany, Italy, Belgium, Austria, Finland and Ireland. His works are in the permanent collections of museums worldwide including The Brooklyn Museum, The Carnegie Museum of Art, The Cleveland Museum of Art, and the Museum of Contemporary Art, San Diego. His 20’ mural, Roundtrip, was commissioned by architect Cesar Pelli for the Washington National Airport project, with Row’s painting, Split Infinitive, on exhibit in the entrance lobby of the Portland Museum of Art, in Portland, Maine.

Articles about Row’s work have appeared in art publications including: Artforum, Art in America, Art International, Art News, Art & Auction, Bomb Magazine, The New Yorker; and in newspapers including: Le Monde, The New York Times, The Village Voice, and the Washington Post as well as many publications in Germany, Switzerland, and Italy. In 1997, a 128-page illustrated book titled Continuous Model: the Paintings of David Row, with text by John Zinsser, was published by Edition Lintel, Munich, Germany. He is also included in Barry Schwabsky’s The Widening Circle (1997), and Joseph Maschek’s Modernities: Art Matters in the Present (1993).