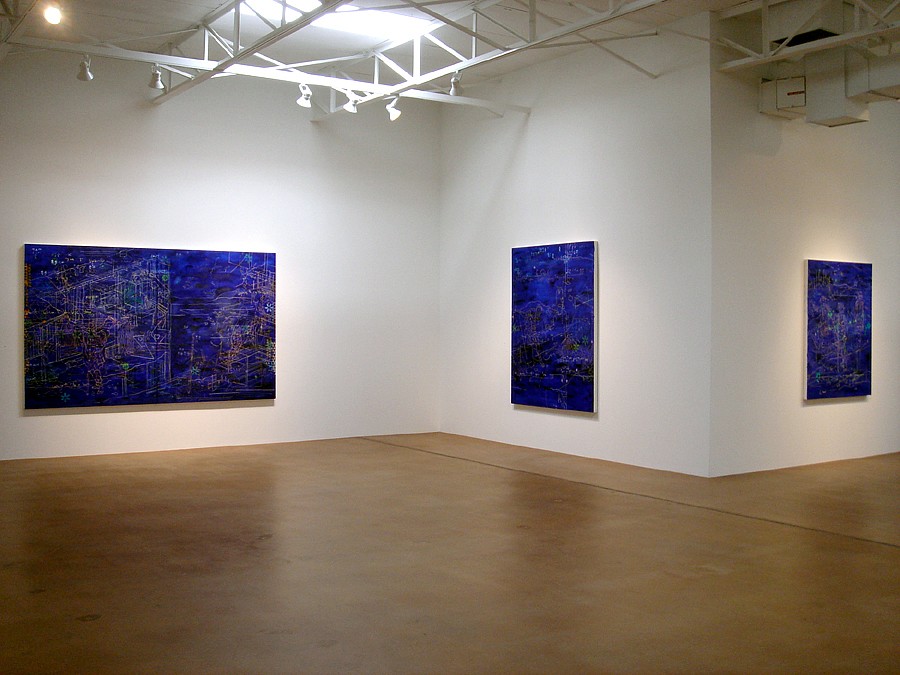 Holly Johnson Gallery in Dallas, Texas is pleased to announce the opening of Gaps, Sinkholes, and Other Chasms, an exhibition of new paintings by Gael Stack. This is her second one-person show at Holly Johnson Gallery. A reception will be held on Saturday, January 5, from 5:00 to 8:00 p.m.

Stack’s new oil paintings consist of rich cobalt blue backgrounds - a color that has played a major role in the artist’s work for more than a decade.  This ground is then overlaid with staccato calligraphic symbols, creating multilayered narrative works.  The narrative remains open ended; less subject to cognitive reasoning, than to a stream-of- consciousness approach. In her new works, the artist continues to examine the phenomenon of memory; “memories are what we have left” she suggests. Further enlivening the surface are foreign language scripts which read vertically and horizontally. Contradictory forces, such as stillness and agitation, structure and disorder create tension within the works.

Alison de Lima Greene of the MFA, Houston suggests, "Like Eudora Welty, Gael Stack has pursued the thread of revelation that time and memory can offer.  Over the past three decades, her work has made duration visible, from scumbled surfaces that attest to the process of painting, to fragmentary texts and images that evoke the notations and devices we use to remind ourselves of past events and future commitments.  It is this retrospective aspect that has captured the attention of most writers on Stack.”

In the 1970’s, Stack received a BFA from the University of Illinois in Urbana and a MFA from Southern Illinois University in Carbondale.  Her work has appeared in numerous group exhibitions such as the Contemporary Arts Museum’s, Perspectives @ 25: A Quarter Century of New Art in Houston (2005), Texas Vision: The Barrett Collection at SMU’s Meadows Museum in Dallas (2004), Establishment and Revelations at what is now the Dallas Center for Contemporary Art (1997), and Three Visions which originated at Centro Cultural Borges in Buenos Aires, Argentina (1996). Numerous solo exhibitions include: Musée des Beaux Arts, L'Echevinage, Saintes, France (1995), Musée de Niort, France (1996), and Gael Stack: A Survey 1974 – 1989 at the Dallas Museum of Art (1989).

Her work is included in many collections such as the Solomon R. Guggenheim Museum, the Museum of Fine Arts in Houston, The Dallas Museum of Art, The Menil Collection, The Krannert Art Museum, The San Antonio Museum of Art, The El Paso Museum of Art, Beaux Art Museum, and the Yale University Art Gallery.  She has received a Cultural Arts Council of Houston Award for Visual Arts, two grants from the National Endowment for the Arts, a Tiffany Foundation Grant, and was named 1997 Texas Artist of the Year by the Art League of Houston. She has been a visiting distinguished professor at Yale University in New Haven and since 1980 the John and Rebecca Moores Professor of Art at the University of Houston.