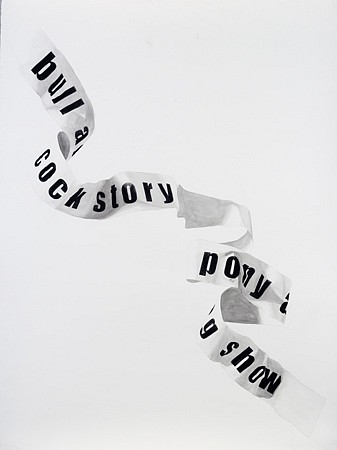 Holly Johnson Gallery is pleased to announce the opening of Randy Twaddle: A.M. in America, an exhibition of new charcoal drawings and the banner models from which they were drawn. In celebration of the Dallas Art Dealers Association’s Annual Fall Gallery Walk, an opening reception for the artist will be held on Saturday, September 16, from 6 to 8 p.m. The exhibition continues through Saturday, October 14, 2006.

The means for transmission of ideas and information has been an ongoing concern of Randy Twaddle’s for the past 22 years. The artist’s early works were large charcoal drawings of communications satellite dishes, power transformers, and other icons of modern technology. In 1995, Twaddle took time off from his studio practice, ventured into video editing, and in 1998 co-founded, ttweak, a communications/design firm in Houston, Texas. The Reversal Drawings from early 2000 ended Twaddle’s hiatus from the Texas art scene and introduced the use of text in his work. In the artist’s first exhibition with the gallery, Twaddle continues to find ways to make art both politically charged and aesthetically satisfying.

“The new drawings represent my continued interest in the effects of altering well-known phrases or clichés by reversing the words on each side of the conjunction “and” or “or”. I’m interested in the reversal’s potential for poetry and political commentary. I form their supporting banners considering spaces between phrases as silence. I hide letters and words, or obscure them in shadows, creating new words or an absence of words in the process. I place them all in front of an arc of radiating lines, an annunciation trope degraded, in these drawings, by its ironic function.”

The artist was born in Elmo, Missouri, and he received a BFA from Northwest Missouri State University in 1980. Upon graduation, he moved to Dallas and lived there for nine years. In 1989 he moved to Houston, subsequently completing his MFA at the University of Houston in 1996. Beginning in 1983 his work began to be widely exhibited throughout Texas, as well as in Los Angeles, San Francisco, Chicago, and New York. He has been the recipient of a National Endowment for the Arts fellowship, a Cultural Arts Council of Houston Harris County Artist Award, an Award in the Visual Arts 9, SECCA, Winston- Salem, North Carolina, and an Arch and Anne Giles Kimbrough Award from the Dallas Museum of Art. His work is represented by galleries in Houston and Austin.