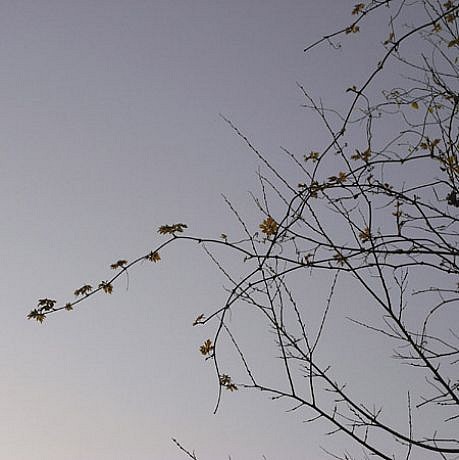 Holly Johnson Gallery in Dallas is pleased to announce the opening of Within, an exhibition of new photographs by the renowned Houston based photographer, Casey Williams. An opening reception will be held on Saturday, December 1st, from 6:00 to 8:00 p.m. The exhibition continues through February 16th, 2013.

In this new body of work, Casey Williams presents photographs from various locales he has visited over the years - more like meditative field trips - yielding serene images of sky, twigs, water, detritus, and small quirks in the environment. For those unfamiliar with Williams' images, they will nevertheless find a distinctive image-making practice, one that imbues the smallest and most imperceptible change of light with a poetic kind of ascendancy.

These new works initially numbering in the hundreds are then edited and curated into bound, one-of-a-kind books. According to Rebecca S. Cohen, "Williams regards these prizes as his 'workbooks,' non-linear illustrations of his thought process, an attempt to "spill the beans" about the way he visits and revisits specific places over time". Some of the imagery seems to repeat, but after prolonged inspection, one begins to notice subtle shifts in movement - a ripple in the water in one but not present in the other - and a manner of observing the mundane that all but erases their humble origins.

In William's new work, one begins to see the same persistence with light and color that has characterized the Houston Ship Channel images, a body of work that has preoccupied the photographer for nearly two decades. In these, as well, imagery is married to a Dibond aluminum surface, animating the work with infinite detail and reflectivity.

Casey Williams received his B.F.A. from the University of Texas in 1970 and his M.F.A. from the San Francisco Art Institute in 1976. In 1999, he received an Individual Artist Grant and Fellowship Award from CACHH, the Cultural Arts Council of Houston Harris County. His work has been included in numerous exhibitions, including: Art Museum of Southeast Texas in Beaumont; Diverseworks in Houston; El Paso Museum of Art; Carnegie Art Museum in Oxnard, California; New Orleans Museum of Art; Contemporary Arts Museum in Houston; The Gallery at the University of Texas at Arlington; Laguna Gloria Art Museum in Austin; The Museum of Fine Arts in Houston; and The Museum of Modern Art in New York.