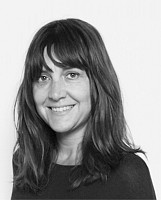 Ana Esteve Llorens was born in Valencia, Spain and has been living, intermittently between Spain and the US for nearly fifteen years.

She holds a Master of Fine Arts in Sculpture and Extended Media from Virginia Commonwealth University and a Masters of Arts and a B.A. from Polytechnic University of Valencia, Spain. Prior to her Art career she was trained as an Engineer and received a Telecommunication degree from Higher Polytechnic School of Gandía, specializing in Image and Sound. She worked as an engineer for four years, in Wolfsburg and in Madrid.

Both, her scientific and artistic education inform her studio practice. In her installations and sculptural pieces craftsmanship and technology combine in the treatment of classical and industrial materials to link and expand the syntax of sculpture. Esteve Llorens has been the recipient of numerous awards and fellowships, which include a Fulbright Fellowship, an Excellence award from AMEXCID,and Fellowship from Arte y Derecho Foundation.

Her work has been shown in Europe and in The Americas. She has been an artist in residence at Yaddo in New York, The French Academy in Madrid, and The National Institute of Fine Arts in Mexico City among others. She lives between Austin, Valencia, and Mexico City.