PRESS RELEASE: Back & Forth: Celebrating Women and our Fifteenth Anniversary

Holly Johnson Gallery in Dallas is pleased to announce the opening of the exhibition Back & Forth: Celebrating Women on July 21, 2020. Back & Forth commemorates the fifteenth anniversary of the gallery and celebrates the centennial of the 19th amendment. The exhibition will continue through September 26.

Presenting sculpture, installation, paintings, drawings, and photographs, this exhibition highlights the varied creative practices and compelling artworks created by the distinguished women represented by the gallery and invites visitors to consider the centennial milestone in the context of a woman-owned business... 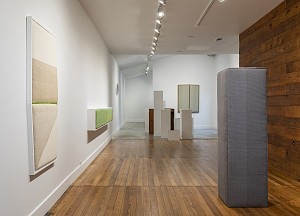 On a recent Sunday afternoon in Austin, I was on my way to meet Ana Esteve Llorens at Grayduck Gallery on East Cesar Chavez Street to discuss her current exhibition “Space is a Reality.” I was groggy after pulling a 13-hour work day the day before, and was prepared for a standard gallery visit — one in which the artist walks me through their exhibition, describing their work, their processes and their inspirations.

What I was not prepared for was for Llorens to immediately ask me how I felt about her art, and for her to encourage me to bring my own story to the multimedia, sculptural work. Llorens hopes that gallery visitors will approach her work as she does, with a less absolutist and more democratic approach to meaning.... 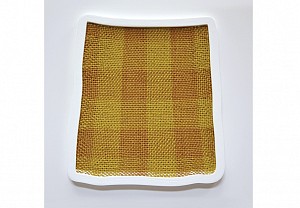 The textiles in this solo show map a negotiation between the weaver and her surroundings, a lattice charting stretch and slack over time. The structure of a woven textile starts simply enough, the warp stretched taut vertically, like harp strings. But then comes the weft, and with it a slew of considerations and intricacies. At Las Cruxes, Ana Esteve Llorens displays a selection of deceptively simple weavings....

I’m living on an island. I don’t know anyone, and I spend most days alone. I came here with the goal of writing more than I’d ever written before. After months of imagining what it would be like, I’ve finally arrived. But I find myself mostly unable to write. I feel like I’m holding a book close against my nose, and all the text is too blurry to read. I realised that I will probably have to wait a few months before putting any of my impressions on paper. I won’t be able to write until I can look back at the island from far away, from a place where I lose all the details that make today so sharp, crunchy, and hard to digest. That’s when I’ll be able to abstract this experience into something worth reading...

“You are actually inside of the memory in a way. It emanates from you. To meditate on it helps me think.”

Compiled from emailed fragments exchanged with a long-time friend — New York-based writer Amira Pierce — over the course of Esteve Lloren’s planning for the show, the catalogue exposes the artist’s history, motivations, personality and feelings without staunch academicism... 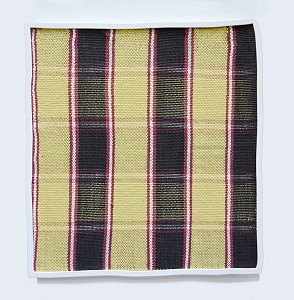 I met Ana Esteve Llorens in her Austin studio on the last morning of August, on one of those summer days when you are already sweating before you get out of the car. It was hot, but the tranquil beiges, whites, and light blues in her studio made me forget about the comforts of AC. Esteve Llorens herself is just as refreshing, and is someone I’ve wanted to meet for a while now. Like myself, she lives and works between Texas and Spain, and I’m curious about how these two places inform her practice. And so I was excited to catch the artist’s new exhibition Correspondence at Las Cruxes in Austin before returning to Madrid...

Bare of rhetorical gestures, the colors and shapes of this installation speak the language of minimalism. Ana Esteve Llorens says that, rather than a choice, minimalism is a trait of her character, her natural way of being in the world. Some shapes and colors could be described as recognizable objects --a yellow arrow or the fragment of an ornamental scroll (the two green pieces). They all are, however, simply geometry -- yellow triangles, blue squares and rectangles, green sections of a circle--, single entities made out of the coming together of shape and color. When associated with geometric abstractions, color is freed from its usual descriptive role and becomes a noun, as it were, instead of an adjective. The deceptive fact that we need a sequence of two words to express the notion “yellow triangle” results from the inherent linearity of natural languages. Free from that limitation, the languages of visual art are able to represent that which is simultaneous in simultaneous ways...

Ana Esteve Llorens talks with her hands, eyes, and the spaces between words. This isn’t due to an inability to talk about her work or a lack of conceptual rigor. In her pauses, that second-long search for the perfect word, there is the knowledge that no word or phrase is a precise substitute for the experience of her work... 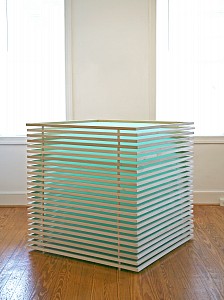 New York is not an easy city. It may be interesting for a visit but it's hard to live there. It's dirty, and often hostile. I guess I really don't like the city, which may pose a problem, now that Ana has kindly invited me to write a text about our meetings there. She wants me to portray her with Manhattan as the background, but I feel slightly uncomfortable. I cannot be entirely objective. I've mentioned this feeling to her in order to avoid any misunderstanding, but my complaints didnʼt faze her. I suspect she likes New York. Maybe she is brave. Or bold. Or maybe she just likes the city so much, she fears mythologizing it, and that's why she's asked me to write this. Now that I think about it, I feel she's not afraid of a final portrait with lights and shadows. And curiously, it is this game of luminous contrasts that has shaped our encounters in the city... 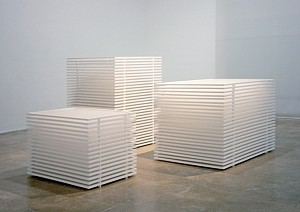 Concepts such as nomadism and sedentariness have an intimate link with space, be it natural, transformed or built. One is no longer a nomad as one used to be a traveller. Both concepts represent ways of understanding life that today can barely be simulated, even by covering one's eyes and ears to avoid seeing and hearing the hum of the things happening, vertiginously, around us. Working with sculpture cannot be the same as it was to travel as a traveler or a nomad. However, it seems that space may well be the same distressed and dispersed concept that can be bounded and manipulated, designed and planned, and never owned. Because it is really space which places us and gives us the measure of things. To work with space is also to extensively think about time, that elusive concept that marks our journeys and our stays...