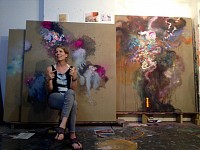 Jackie Tileston brings a global sensibility to her work by drawing from many different cultures. Her cosmopolitan background lends authority to her painterly affirmations of the medium's innate capacity to absorb, transform and interpret the global nature of contemporary society. Tileston’s trans-cultural life journey has taken her from her birthplace of the Philippines to Philadelphia, but also around the world. She has spent months at a time living in India and Italy, absorbing the cultural influences and gathering pictorial material, motifs and inspiration for her recent paintings. Dense areas of vivid color and imagery exist alongside nebulous dustings of powdered pigment and expanses of bare linen, creating opulent and sophisticated surfaces. Into this wide spectrum, the artist also overlaps recognizable fragments of Chinese landscape painting, with transfers of French wallpapers and rustic panoramas from art history directly onto the surface.

Tileston received a B.A. from Yale University in 1983, an M.F.A. from Indiana University in 1988, and was a Core Fellow in the residency program of the Museum of Fine Arts, Houston from 1988-1990. In 2006 she received a Guggenheim Fellowship, in 2004 a PEW Fellowship in the Arts, and in 2005 she was honored with a Bellagio Residency in Italy from the Rockefeller Foundation. Her work is in the permanent collections of the Dallas Museum of Art, The Museum of Fine Arts Houston, and the West Virginia University Art Museum among others. Her work has appeared in exhibition venues such as ArtPace in San Antonio, Contemporary Art Museum in Houston, Delaware Center for Contemporary Art, Galveston Art Center in Texas, McKinney Avenue Contemporary in Dallas, Museum of Fine Arts, Houston, Philadelphia Art Alliance in Pennsylvania and several others. She is currently an Associate Professor of Fine Art at the University of Pennsylvania.