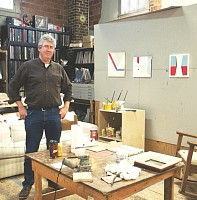 David Aylsworth’s work represents an intense physicality that comes from layering paint in such a way that both hides and reveals. These casual yet deliberate brushstrokes profess a quirkiness of execution typical of the artist’s self-deprecation and lightheartedness. Active compositions and playful relationships between color and form create depth and interaction in each of his abstractions.

David Aylsworth was born in Tiffin, Ohio in 1966. He received a B.F.A. from Kent State University in 1989.  From 1989 to 1991 he was a Core Fellow and Resident at the Glassell School of Art, Museum of Fine Arts, Houston. In 2001, The a ten-year survey of his work traveled to the Galveston Art Center, Texas A&M University in Commerce and the University of Arkansas in Fayetteville. Aylsworth has been a recent recipient of an Artadia Award Houston and an Individual Artist Grant from the Cultural Arts Council of Houston/Harris County in 2005. In 2012 a 64 page book was published on Aylsworth’s work and featured an essay by Kurt Mueller and an interview between the artist and Toby Kamps, Curator of Modern and Contemporary Art at the Menil Collection in Houston. In 2013 the Contemporary Arts Museum Houston included Aylsworth as part of its six-part 65th anniversary exhibition featuring abstract painting, curated by director Bill Arning. The artist currently resides in Houston, Texas.