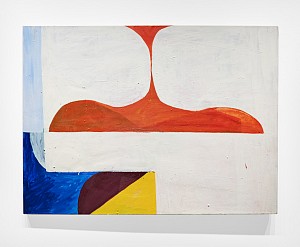 I have been on a week-long state of euphoria after spending time seeing so much art during Dallas Gallery Day. Take out all the driving, and I had the feeling I was at a mini art fair. The Dallas Art Fair opened up their gallery space, which reinforced my feelings. So many familiar faces, with masks, moved in and out of the art spaces. The Dallas art scene was opening up again. Almost everyone had a vaccine story to tell. I don’t think I met a single person that hadn’t had one or two. The galleries worked the crowds to flow around with respectful distance. Thankfully, the weather was great, so there were moments you could talk outside if things felt too crowded... 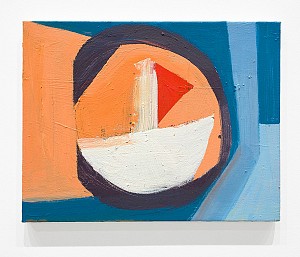 PRESS RELEASE: David Aylsworth - A Dish You Wish You Had Took - Opens in April

Holly Johnson Gallery in Dallas is pleased to present A Dish You Would Wish You Had Took, an exhibition of thirteen recent paintings by David Aylsworth. This is the artist’s sixth solo show with the gallery, and it opens on Saturday, April 3rd with an open house from 11:00 a.m. to 5:00 p.m... 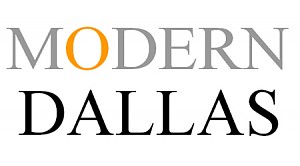 If you’re looking for calm before the storm of “DFW Art Month,” then I would recommend two shows to visit. First, take yourself away on a trip to the quiet abstraction of boats and the sea wave. At least many of David Aylsworth’s paintings seemed to visually reference the nautical theme. For a further strip down show of pure colors and white rectangles, head over to see Jeffrey Cortland Jones’ paintings. Both will cleanse your palate for the inevitable glut of art about to come our way with the Dallas Art Fair and all the art opening to come... 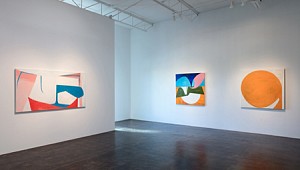 “I don’t really have a fixed idea when I start a painting,” says Houston painter David Aylsworth. The exhibition Wherefore & Hence, which runs through March 24 at Holly Johnson Gallery in Dallas, showcases works from the last two years in which Aylsworth has further refined and evolved his distinct style and approach to painting while also venturing into uncharted waters.

“I end up gravitating towards certain shapes, forms, and colors. In this show, a large number of the paintings seem to have the appearance of a landscape or seascape to them in an abstract way,” he says. “Previously my paintings occupied a shallow space or depth; now I like the idea of being able to read something in the distance, like looking across a big wide ocean for miles on end.....” 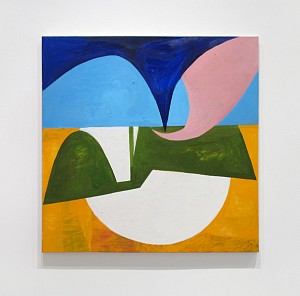 Holly Johnson Gallery in Dallas is pleased to announce the opening of Wherefore & Hence, an exhibition of ten recent paintings by David Aylsworth. This is the artist’s fifth solo exhibition with the gallery. An opening reception will be held Saturday, January 6, from 5 to 8 pm. The exhibition continues through March 24, 2018.

David’s Aylsworth has spent years cultivating his painting practice – with exuberance, quirkiness, and imperfections embedded in his method. Refinement has never been an Aylsworth goal, yet in Wherefore & Hence he reveals a certain restraint evinced by more simplistic compositions.

When describing his work,art historian Sandra Zalman states, “Where there are brushstrokes, drips, clotting and scraping… it is evident in the almost discursive way that shapes coalesce to articulate a larger story of meditation- the fine line between form and figure, or plane and ground, which speaks to the very human quality of finding opportunity in uncertainty, near connections, qualifications, and do-overs. The paintings may play, and tease, and flirt, but their force derives from the quiet, unassuming way they confront these larger concerns.”...

Houston artist David Aylsworth is well-known within Texas art circles for his stunning abstract paintings celebrating his facility with the brush, sophisticated understanding of color, and harmonious spatial relationships between form and shape... 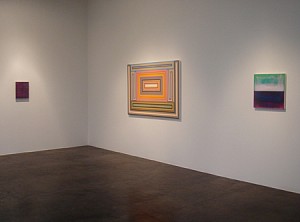 Holly Johnson Gallery in Dallas is pleased to announce the opening of MANMADE, an exhibition of new paintings by seven artists... 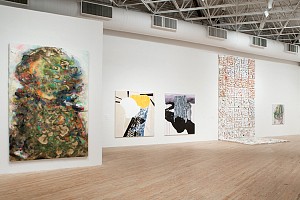 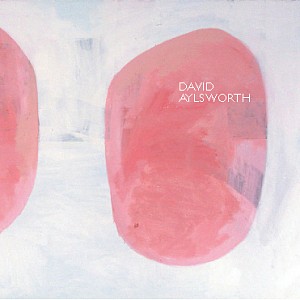 Available at the gallery and on Blurb. 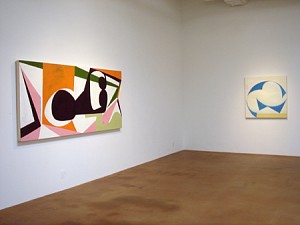 Pinks, yellows and whites dominate this group of recent oil on canvas paintings, which continue to reference, in both title and optical display, the gaiety of Broadway numbers and choreographed performances between stage actors.